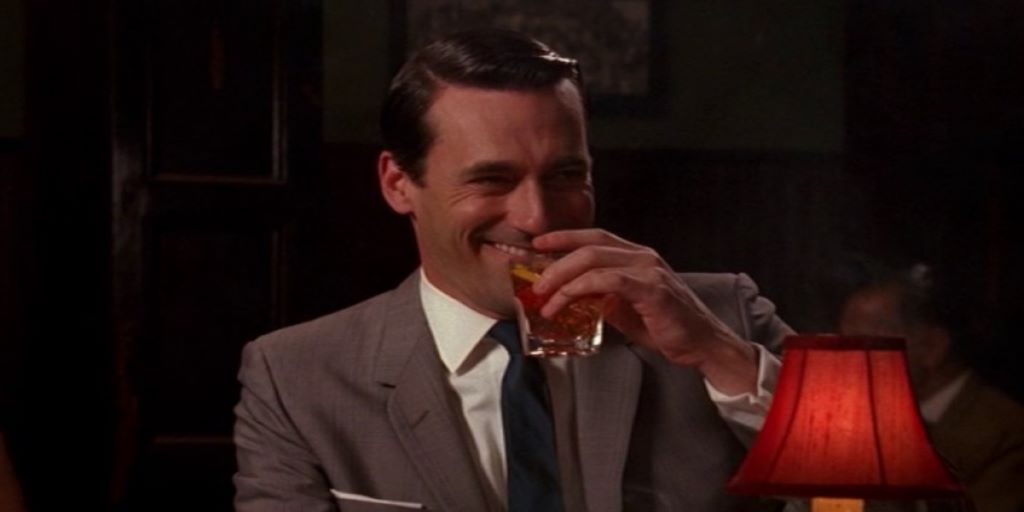 Let’s peel through this like an onion to get to the center of Don Draper.

Throughout the series of Mad Men, Don Draper portrays himself as a charming, seemingly flawless womanizer. He has a wife, beautiful children, and a multitude of beautiful mistresses. Don Draper uses his charming wits and charismatic talent to get what he wants in business. Although from the outside Don Draper appears to have everything he desires, it is clear to the audience that Don Draper is hurting inside on a deeper level. They could be the explanation for his self-destructive tendencies.

What Kind of Man is Don Draper?

Don’s shallow approach to his advertising job gives us a hint of the theme of his character. During a drunken pitch he spews out about the cereal Life, he shouts slogans off the top of his head during a business meeting instead of carefully constructing them. This clearly shows that he does not believe in what he is selling to people. It leads the audience to wonder if his approach to his work may actually provide some insight to him as a person. Don Draper may appear to be a perfect man with perfect hair and an arrogant attitude, but deep inside, not even he believes the act that he is trying to portray.

It becomes clear throughout the series that Don Draper is more metaphorical than one could ever predict in the beginning of Mad Men. He longs to fix the hollow feeling inside of himself. Yet he fails to realize that this feeling is a direct result of him actively trying to become something that he is not. His characteristics resemble an inconsistent and superficial identity made up of the classic American ideals that he believes will fulfill him.

Does Don Draper Have a Mental Illness?

We find that the façade of Don Draper is entirely that— a façade. He made a completely false identity. He was originally born with the name “Dick Whitman” to a prostitute who died giving birth to him. His father beat him as a child and Don was referred to as a “whore’s son” by his stepmother. Dick Whitman found himself fighting alongside the real Don Draper in the Korean War. After the real Don Draper was killed, Whitman stole his identity and assumed his life. He believed that his new identity would grant him prosperity and happiness, as the tormented young boy from the Midwest did not exist anymore.

It’s safe to say that this is not a normal occurrence in society.

Don then turns to affairs, alcohol, power trips, and many other unhealthy coping mechanisms to try and escape his true self and past. His childhood abandonment issues and tragic lack of relationship with his late mother may be some of the reasons for Don’s womanizing habits. They present themselves darker than just “habits” when Don is shown to be explicitly cruel and degrading towards his neighbor Sylvia during their affair.

What have all of these repressed memories caused for Dick Whitman / Don Draper?

Medical experts have weighed in on this topic and have agreed that one could presume that Don Draper could have a mixture of mental illnesses from his childhood trauma that stems into adulthood. Examples of such include borderline personality disorder, narcissism, alcoholism, antisocial personality disorder, and the list goes on. Not only does Don Draper behave in appalling ways, but he cannot seem to help himself. Perhaps with expert treatment and medication, Don could have gotten better and turned his tables around.

*Image courtesy of: Know Your Meme

Have you met a Don Draper in real life? The comments section is open below for your story.