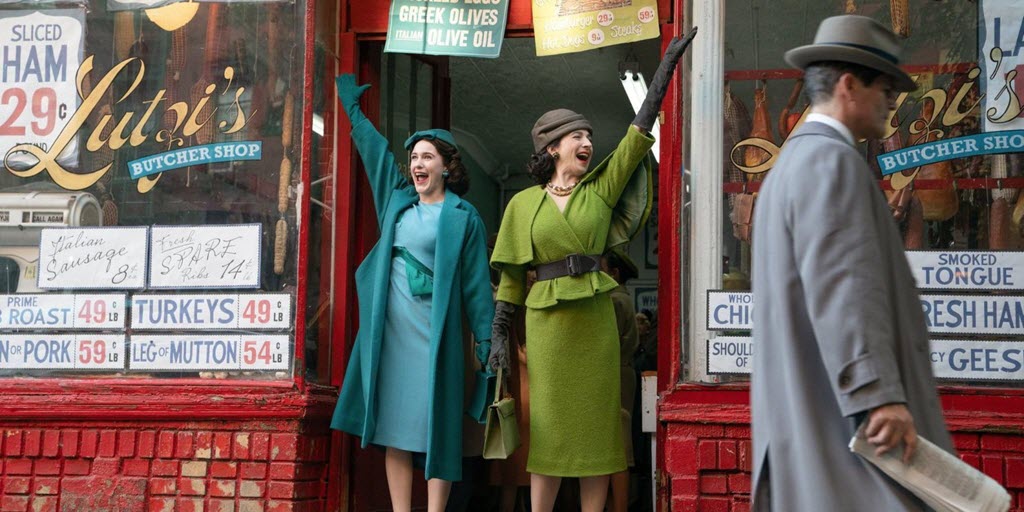 With the setting of the show taking place in the late 1950s, The Marvelous Mrs. Maisel is a beautiful, comedic fictional series of a woman rising up in the epitome of a man’s world. Mrs. Maisel, or “Midge” in the show, faces many challenges that would break even the strongest of women in today’s society. Her initiative and resilient spirit combined with her infinite wit keep us captivated with each episode. Despite the curveballs that her life throws at her, Midge maintains her admirable constitution and serves as an inspiration to anyone going through hardship.

In season 1, we meet Midge as the resourceful, doting housewife to her husband Joel, an aspiring comedian. She does everything that a woman in the ’50s was expected as a wife; she is the sole caretaker of the children, cooks elaborate family dinners, and goes as far as to sneak out of bed in the morning to do her hair and makeup before Joel wakes up, even though they’ve been married for 4 years. It also becomes clear that Midge is carrying Joel’s performances by bribing the comedy club owner with brisket and writing Joel’s sets and he sleeps soundly on her shoulder.

Yet that clueless fool still cheated on her and left her for his secretary… This is where things start to get inspiring.

Is Mrs. Maisel based on a true story?

While Marvelous Mrs. Maisel is not based on a true story, we do witness Midge in everyday struggles that anyone could face in the real world (including seasons 2 & 3). She hits rock bottom in the midst of her divorce and feeling like her whole life is ending before she begins to create the magic we soon see. In fact, it could be said that it was because she hits rock bottom that we get to see her amazing transformation. Who couldn’t relate to that after a breakup?

Upon being left for another woman, Midge gets drunk and finds herself onstage at the comedy club that she sweet-talks the owner into allowing her husband to perform. She puts on a great show, gets lots of laughs, flashes the crowd and gets arrested. Her performance is far from the customary behavior of the typical 1950s woman but might be witnessed at the bar around the corner in present-day New York.

After that incident, instead of falling into an endless abyss of self-pity and hopelessness, dejected Midge begins creating an astounding life for herself. She gives up her comfortable, luxurious apartment in the upper west side of Manhattan to move in with her parents so they can watch the kids while she goes to work at her new job at B. Altman. She continues her passion and talent for standup comedy. She even begins to allow herself to entertain the idea of love again. But above all, she follows her dreams and begins to make a name for herself – even if she is keeping her married name and performing as “Mrs. Maisel.”

Will Mrs. Maisel still be Marvelous in season 4?

There is no doubt that expectations are high for the fourth season. The fact that Midge chooses to love herself and her family above lowering her self-worth and begging for a man who was foolish enough to lose her, will hopefully inspire anyone who knows the feeling of being cheated on. This is especially impactful being set in the 1950s when women were primarily taught that they “needed” a man and existed to serve that man.

Instead of focusing on her anger towards her ex-husband (and girlfriend) and the stress that she has from losing her standard of living, Midge focuses her energy on self-love. She harnesses her talents and her energy to create something productive and something that can support her family. Most of all, she never gives up despite numerous setbacks and the attempts of others to sabotage her.

Mrs. Maisel is the kind of person that we would all love to have as a best friend to give us advice and make us laugh in the hard times, but is probably too busy being fabulous and crushing her goals.

We can only imagine what courageous adventures we can see next in season 4. The release date is still unknown due to postponed filming thanks to the coronavirus. Surely, it will be worth the wait.

Have you watched Mrs. Maisel on Amazon Prime?
Join the conversation in the comments below.